Guess the Other 2 Enviros

What we need, and this is really a good idea, I think, is in the next incarnation of "Bay", or whatever city environ is next, well, actually we could do this in all the environments. We need it to have more life! They don't have to move, they could just be parts of the track, just like the light posts or obstacles, but we could use some parked cars in front of buildings, or people "blocks" standing next to the track watching--I really think that would give TM the extra "boost" into "full realism" that it needs. At least IMO. I do really want to see people...everything seems so stark, sterile, and ghost-town like without them...You can't really race without an audience!
Cruisin' through life, TM-Style!

Adding people to the environments that walk around would crank up the system requirements, reduce the framerate, or a combination of both. And it had better not be possible to hit any of the people with your car, or the game will get rated T by the ESRB.

Besides, none of the Need For Speed games had any pedestrians, and no one complained about that, so why are you?
Top

cause if people move it will be good for some people and bad for other, and we have to have the same justice for all

*goes back to read his post to see if there was any mention of moving* No, didn't think so. I didn't say moving people. I specifically said people "blocks", i.e., non-moving people that were like the old rendered audiences, except on a slightly better scale. And I don't take too kindly to this particular quote

Besides, none of the Need For Speed games had any pedestrians, and no one complained about that, so why are you?

There's no need to have an attitude with me, especially considering A) I only voiced my opinions, and didn't pass an edict and expect everyone to fall in line behind me and B) You're a relative newbie to the trackmania experience, I've been around a lot longer than you have, and I'm pretty sure I would know what would be good or not for TM.
That being said, I didn't like the NFS games that didn't have any other activity other than the cars on the track. I liked NFS Underground, but that had other cars in it. Since TM is not going to support car collisions, I thought of the next best thing. And NO, they're not going to be able to be hit--where is your brain, seriously? Did you even really read my post--or are you just looking for someone to attack? I know how trackmania works, and I'm not proposing a change to it. I was suggesting an ADDITION. Please re-read my post, just so you understand it.
Cruisin' through life, TM-Style!

Velodrome actually looks like a good idea, if I see that in the game as the arena enviro I would not be dissapointed.

And you two dudes need to calm down, yes, you've been around a long time, that does NOT give you the right to jump down other people's throats. However (other dude who's name escapes me) you might have wanted to seem a bit less confrontational, you could have asked for more details rather than assuming you knew what he meant.

And (for the record) just because someone is a low ranking on the forums does NOT mean that they are new to the game, I have been playing since 2004, and I havent posted much here.

I don't want to fight with anyone, I'm just saying what I am thinking, which is what the forums are about (in my OPINION).

and i think its a bit boring

Okay, fine, you can have people in the environments as long as they stay in one place and they are transparent.

But instead of having multiple different environments with different colors and buildings linked to each environment, why not enable users to make a single track with elements of multiple environments, like having a track with a snow section, a grass section, and a desert section for example. RollerCoaster Tycoon 3 allows you to build amusement parks with a wide variety of surface textures for each park.

Personally, I would also like to see a surface that uses procedurally generated textures to look more vibrant, like a two-dimensional plasma ball.
Top

I apologize for jumping down TM-Infinity's throat. I was in a bad mood, and that was the straw that broke the camel's back, so to speak. Wrong person to bitch at, and I'm sorry. And to TaeKwonDUDE, I was referring to his join date, not his post count. But that's a past issue. However, to Infinity, while your idea about the plasma ball and crazy colors is creative, I'm not sure I entirely understand just where you're going with it. To me, it sounds like you're suggesting something like Wipeout or F-Zero, which are fun games in their own right, but they're not Trackmania. Trackmania does try to incorporate the feel, if not the letter, of realism in its design. So while that sounds fun, it almost would sound to be better suited in an entirely different game. ^_^
Cruisin' through life, TM-Style!

I just converted that same car from Pod! 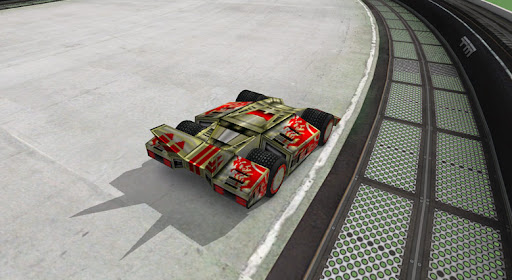 Maybe the Pod tracks could be loaded into TM2 as custom blocks. I'm sure some of the technical Pod heads could figure out a way to do it.

Every Pod track had a unique look.

Now that Ubisoft owns Pod and Trackmania, they could remake the Pod stuff in TM! (haha fat chance)
Top

I just converted that same car from Pod!

Maybe the Pod tracks could be loaded into TM2 as custom blocks. I'm sure some of the technical Pod heads could figure out a way to do it.

Every Pod track had a unique look.

Now that Ubisoft owns Pod and Trackmania, they could remake the Pod stuff in TM! (haha fat chance)

a bit squared but its cool
Hey!

That car you made had better be available on Carpark, if it isn't, please correct this

a bit squared but its cool

Thanks! except for the wheels, the geometry was extracted directly from the pod car file. I had to map the textures manually, though.


TaeKwonDUDE wrote:That car you made had better be available on Carpark, if it isn't, please correct this

There are a couple of problems with it because I don't quite understand all the requirements needed for car models. Good enough for me to use, though. Most of the car making tutorials are in French. It was my first try.
Top

I imagine Arena would be something in the vein of Stadium. Probably more like that of a Skate Park or a Motocross arena... either on concrete or dirt with heavy emphasis on banks, quarter/half/fullpipes, jumps and 'arena' stuff rather than track pieces.

In other words, Stadium except for the cool Stunt junkies rather than Race.

As for the second environment, I haven't the foggiest idea... but it's probably going to be something urban. What we need is something like a stereotypical movie-Tokyo. Y'know, the dark, dense city with all the crazy futuristic neon lights and the low sports car? Yeah, that'd be cool.
Top

Well, TM-environments have always been trinities: i.e., they're always seeming to be points of a triangle of environments--all being different in their own respect. Like Rally Desert and Snow: All very different environments. Forest desert and a mountain--all with different handling, etc. I think it's fair to leave stadium out of the "environment triangle" because it was added lastly and was free...but this is all just my opinion. But if I am right--maybe TM2 will look something like this:

Arena: taking TM to the next level, maybe, a fully enclosed stunt track, like MCXD proposed, only with the track itself being "para-magnetic" maybe? Like, as long as your wheels are touching the track, you can't fall off--allowing for upside-down track pieces and such. But, if you hit the end of a track piece, you're airborne, still allowing jumps, loops, and the like.

Asia: Maybe Snow, minus the snow? Like a hillclimb environment, TM-Style--where you get a superpowered rally car like a Suzuki or something and make it up steep hills and hairpin banks--edge of your seat all the time. Just my thoughts.
Cruisin' through life, TM-Style!